isomesh creates a mesh isosurface object from a map object.

The arguments selection, buffer and carve can limit the mesh display to a selected area, and/or extend the area by symmetry operators if the selection is located outside the map bounding box itself. 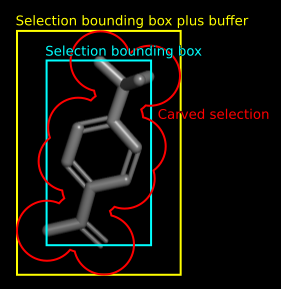 If the mesh object already exists, then the new mesh will be appended onto the object as a new state (unless you indicate a state).

MAP AROUND THE CENTER

You can create mesh around the center of the view by specifying "center" as the selection argument.

MAP OUTSIDE THE CALCULATED AREA

When map_auto_expand_sym is ON, you can create mesh beyond the precalculated volume. In this case, symmetry information (lattice constants, space group) of the model specified in the selection argument if available, or (new in 1.7) from the map object.