Currently, the most recent version can be obtained at the Insilab web page.

LiSiCA is a software for 2D and 3D ligand based virtual screening. It uses a fast maximum clique algorithm to find two- and three- dimensional similarities between reference compound and a database of target compounds in Mol2 format. The similarities are expressed using Tanimoto coefficients and the target compounds are ranked accordingly. LiSiCA is developed and maintained at National Institute of Chemistry, Slovenia.

LiSiCA Plugin is free for Academic (NON-COMMERCIAL) use. However, for COMMERCIAL use the potential users have to write to Janez Konc.

The plugin should work on Windows and all variety of Unix like systems. Most of the tests were performed on Windows 7, Ubuntu 14.04 and Linux Mint. To work properly, the plugin requires Python with Tkinter and PyMOL. The plugin was mainly tested with PyMOL 1.7.x.

This plugin is ready "out-of-box" in most Linux and Windows operating systems and is available on GitHub in the Pymol-script-repo repository.

The lisica.py script initializes the installation of the plugin. The script downloads and installs all the required files. On successful installation, a directory named .lisicagui is downloaded and saved in the home directory. This folder contains the executables, log files, icon files, python modules etc.

Once the files are properly installed, LiSiCA plugin version will be ready to use.

Important note: For complete installation of the plugin, a stable INTERNET connection is required.

The plugin window has four tabs.

Both the reference and the target compound files need to be in the Tripos mol2 format. The reference file should contain only one (reference) compound; the target file may contain many compounds. If the reference file contains more than one compound, the first molecule is used as a reference. The molecules in the target file having the same name are considered as different conformers of the same molecule. By default only the best-scoring (by Tanimoto coefficient) conformer will be shown in the final output for the 3D screening option.

In the mol2 input files, the name of the molecule (ZINC ID) must be specified under the line for @<TRIPOS>MOLECULE tag. For example,

In the above line from a mol2 file, in bold, in column 5, the SYBYL atom type is specified.

In 2D screening, the option Maximum Allowed Shortest path Difference corresponds to the maximum allowed difference in shortest-path length between atoms of the two compared product graph vertices. Lesser values correspond to a more rigorous screening. By default this value is unit bond.

In 3D screening, the option Maximum Allowed Spatial Distance Difference corresponds to the maximum allowed difference in distances between atoms of the two compared product graph vertices. Lesser values correspond to a more rigorous screening. By default this value is 1 Å. The Number of Conformations option corresponds to the maximum number of outputted files of one molecule in different conformations and is to be used only for 3D screening. 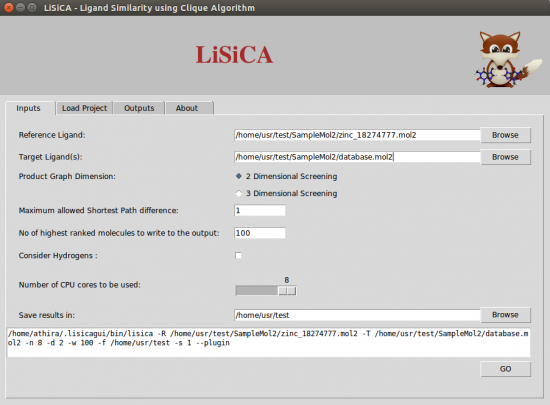 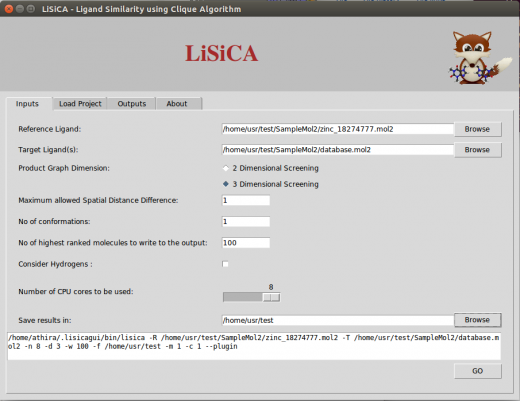 According to the value of Number of highest ranked molecules to be written to the output (say W), LiSiCA will create mol2 files of that many (W) highest scoring target molecules with a comment section at the end of the file where the matching atom pairs are displayed. This value is by default 100. The resulting mol2 files are written into a time-stamp directory in the folder specified in Save results in:. By default this folder is the user's home directory. Also, a text file named lisica_results.txt with the target molecules with (in the descending order of) Tanimoto coefficients is written to the time-stamp folder.

The Number of CPU cores to be used allows selection of CPU threads used for LiSiCA. By default, it tries to detect the number of CPUs available. The Consider Hydrogen options lets the user to choose if the hydrogen atoms are to be considered for the calculation of the similarity using the maximum clique algorithm. By default, hydrogen atoms are not considered in finding the largest substructure common to the reference and target molecules, so as to obtain faster results.

The plugin also has a feature to load saved results. On the Load Project tab, the user can choose the directory with the saved results (mol2 files of each target and the reference) and the lisica_results.txt file. When the load button is clicked, the results will be loaded onto the output tab and the PyMOL Viewer window.

In the output tab, there are two listboxes:

Any single pair of corresponding atoms can be selected on this listbox using a mouse click or using up/down arrow keys. The selected pair is highlighted on the PyMOL viewer window.

For 2D Screening, the two molecules (the reference and the selected target) are visualized side by side on the PyMOL viewer screen.

For 3D Screening, the 3D structures of the two molecules (the reference and the selected target) are superimposed on one another to visualize the similarity on the PyMOL viewer screen.

The users can get information on new updates if available on the About tab.

If you are using LiSiCA in your work, please cite:

LiSiCA software is copyrighted by :

The terms stated in the following agreement apply to all files associated with the software unless explicitly disclaimed in individual files.