Difference between revisions of "ResDe" 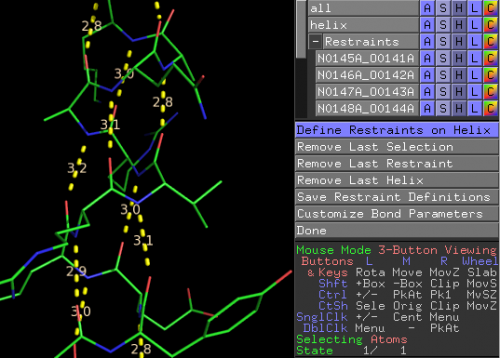 As restraints are added, a new collapsible object menu will appear in PyMOL called 'Restraints.' This menu contains all restraints that have been defined by the user. Restraints can be removed by deleting the restraint object (the dotted line) under the Restraints menu (see figure). The objects are named using the residue numbers and atom names of the two atoms that are restrained. This restraint objects are listed in numerical order for simple navigation.

Restraint Definer is a PyMOL plugin; after installation the user can access this tool by simply using the plugin menu in PyMOL. The user will first use PyMOL to open the pdb file that they would like to display their restraints on. Upon running Restraint Checker (via the Plugin menu), the user will be asked to open the restraint file that they want to display. The user is then asked to choose the object on which to display the restraints (this is essential for the program and is useful if there is more than one object open in PyMol). Like Restraint Definer, a dotted line will appear between each pair of atoms that have been restrained. Also like Restraint Definer, the collapsible object menu called 'Restraints' will appear where all restraint objects are listed.

Restraint Compare is a stand-alone program that is run by simply opening the program or running it from the command line. There are special requirements depending on the platform that you are using (see installation instructions). Upon running Restraint Compare the user will be asked to open two different restraint definition files. The user is then asked to confirm that they have opened the correct files. They are given the option to change the file if needed. The two files are referred to as 'File1' and 'File2.' The user then can view the differences, which will come up in a separate window with the option to save the differences. This differences file can be brought up in any text editor.