Although PyMol has a powerful and flexible interface, it is complex, and can appear daunting to new users. This guide is intended to introduce the PyMol interface and basic tasks without leaving the mouse behind.

When PyMol is opened, two windows appear. The smaller window (called the "External GUI" in PyMol documentation) has the menu bar (File, Edit, Help, Display, etc), a set of buttons which are shortcuts to common commands, and the command line.

The second window is the PyMOL Viewer, which is where all the magic happens. In the Viewer, 3D models are displayed, and the user interacts (eg rotates) and manipulates the model.

The objects that PyMOL renders in 3D are loaded from coordinate files that describe (in great detail) locations of individual atoms in the molecule. PyMOL can display more than one object at a time, and provides an Object Control Panel to adjust viewing modes, colors, labels, hiding, and just about anything else relating to objects. After each object name is a set of command buttons which control the object. Here are the buttons and some of their options:

The lower-right corner of the Viewer contains a guide to using the mouse, as well as a powerful selection tool. There is also another command line at the bottom of the Viewer (PyMOL>).

About the command line

The PyMol command line is a great tool that lets the experienced user change all sorts of options that simply don't appear in the point-and-click graphical interface. It can also be a lot faster. Combined with scripting, it is a powerful option for automating tasks and making intricate sets of changes. But, it's complex, and page upon page of PyMol documentation cover these commands, so we're going to ignore them as much as possible.

Although this guide may include some text commands (like this), they're purely optional and meant to be informative. To run any text command, type it in at a PyMOL> command line and hit [Enter].

Getting started: explore a protein

PyMol is great for casual visualization of biological molecules. In this example, a PDB file describing a protein is loaded and its style and color are tweaked. 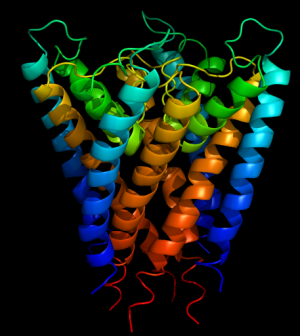 Default buttons for viewing with a 3-button mouse

What else is this thing good for?

So, now what? Good question. PyMOL is a powerful program, and everyone uses it for something different. The remainder of this guide is devoted to common tasks that come in handy.

You've found the perfect view, and you'd like to save it?

Tip: Using the ray command before saving an image will create a higher quality version of the molecule with shadows, etc. Depending on the size of the image and speed of the computer, it can take a while (seconds to minutes...), but the images created with ray tracing are usually spectacular. However, the ray tracing disappears if the view is changed in any way.

PyMOL is a program meant to be explored and played with, and sometimes funny things happen in the process. A few common scenarios: