You can manually assign secondary stuctures to your protein by

Color by atom type from a script

See Color for this.

See section Color for this.

PyMOL can deduce bonds from the PDB structure file, even if the CONECT records are missing. In fact, PyMOL guesses bonding connectivity based on proximity, based on the empirical observation that two atoms of a given radius will not be generally closer than a certain distance unless they are bonded.

You can go into the lines mode and turning on the valence display:

A higher value for valence spreads things out more. See the Valence page for more information on options for changing the appearance of the valence lines. 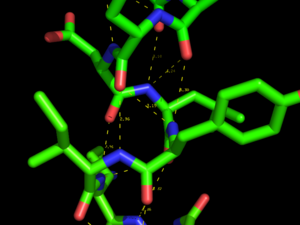 Using the actions [A] button for an object or selection you can display Hydrogen bonds and Polar Contacts. [A]->find->polar contacts-><select from menu>

The command behind the menus is the distance command called with the additional argument mode=2.

with ideal geometry and

These settings can be changed *before* running the detection process (dist command mode=2 or via the menus).

Note that the hydrogen bond geometric criteria used in PyMOL was designed to emulate that used by DSSP.

Hydrogen bonds where find->polar contacts doesn't do what you need

You can show H-bonds between two objects using atom selections so long as hydrogens are present in both molecules. If you don't have hydrogens, you can use h_add on the proteins, or provide ligands with valence information and then use h_add.

Two examples are below. For clarity, they draw dashes between the heavy atoms and hide the hydrogens.

The "polar contacts" mentioned above are probably better at finding hydrogen bonds than these scripts. "Polar contacts" check geometry as well as distance.

Generally speaking, PyMOL does not have sufficient information to rigorously determine hydrogen bonds, since typical PDB file are ambiguous with respect to charge states, bonds, bond valences, and tautomers. As it stands, all of those things are guessed heuristically. Rigorously determining the location of lone pair electrons and proton coordinates from raw PDB files is a nontrival problem especially when arbitrary small molecule structures are present. In addition, PyMOL would also need to consider the implied coordinate error due to overall structure resolution and local temperature factors before rigorously asserting than any specific hydrogen bond does or does not exist.

Furthermore, our hydrogen bond detection machinery was originally developed for purposes of mimicking Kabsch and Sander's DSSP secondary structure assignment algorithm (Biopolymers 22, 2577, 1983) which is based on a rather generous notion of hydrogen bonding (see Kabsch Figure 1).

Although this approximate capability can be accessed via the distance command using mode=2, the criteria applied by our implementation may be based on heavy-atom coordinates (only) and does not necessarily correspond to anything rigorous or published. So the bottom line is that PyMOL merely offers up putative polar contacts and leaves it to the user to determine whether or not the interactions present are in fact hydrogen bonds, salt bridges, polar interactions, or merely artifacts of incorrect assignments (i.e. two carbonyls hydrogen bonding because they're being treated like hydroxyls).

With respect to the h_bond_* settings, the angle in question for h_bond_cutoff_* and h_bond_max_angle is ADH, assuming H exists. If H does not exist, then PyMOL will guess a hypothetical coordinate which may not actually be valid (in plane, etc.). Tthe hydrogen must also lie within a cone of space with its origin on A (along B->A) and angular width h_bond_cone. Since h_bond_cone in 180 by default, the present behavior is to simply reject any hydrogen bond where the hydrogen would lie behind the plane defined by the acceptor atom (A) in relation to its bonded atom(s) B (if any). In other words, if B is only one atom (e.g. C=O vs. C-O-C), then by default, HAB cannot be less then 90 degrees.

The two h_bond_power_* settings are merely fitting parameters which enable PyMOL to reproduce a curve shape reflecting Kabsch Figure 1. The endpoints of the effective cutoff curve is a function of the two h_bond_cutoff_* setting.

To calculate the surface area of a selection, see Get_Area.

For a solvent accessible PSA approximation:

Showing dots isn't mandatory, but it's a good idea to confirm that you're getting the value for the atom dot surface you think you're using. Please realize that the resulting numbers are only approximate, reflecting the sum of partial surface areas for all the dots you see. To increase accuracy, set dot_density to 4, but be prepared to wait...

Once the Van der Waals radii for the selection have been altered, the surface representation will also be "probe-inflated" to show a pseudo solvent accessible surface, as detailed above. 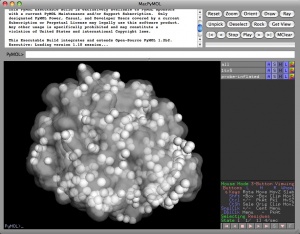 Note that to display both the molecular surface and the solvent-accessible surface, the object must be duplicated, as is done for Surface#Representation-independent Color Control. This also applies if the spheres representation is to be used to display "real" atoms. 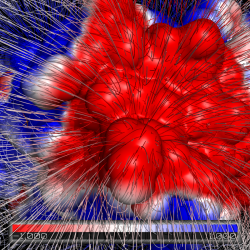 To produce an image with electric field lines, first run APBS. Then, input the following: 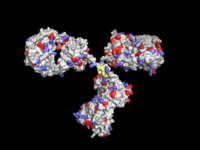 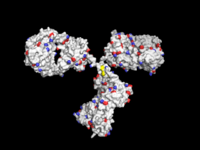 Not-so-poor-man's solution: In order to have the functional groups better localized, only the central atoms can be colored:

In this way, they are better visible through the surface compared to only one colored atom, both amines and carboxylic groups consist of three colored atoms each.

By displaying the protein as non-transparent surface, only the functional groups (colored atoms) at the surface are visible. The visualization of those groups can be pronounced by displaying the corresponding atoms as spheres, e.g. "as spheres, carboxy + amine_lys + sulf_cys", in this way it might become more clear how accessible they are.

Displaying the C-Alpha trace of proteins

And if your model only contains CA atoms, you'll also need to issue:

You can replace sticks in the above by other representations like spheres or lines.

Should you ever want to show the phosphate trace of a nucleic acid molecule:

If two proteins have significant homology, you can use the Align command:

which will perform a sequence alignment of prot1 against prot2, and then an optimizing fit using the CA positions. I'm not sure if the help text for align got into 0.82, but the next version will definitely have it.